By HANNAH STEELE- What comprehensible idea can unite people from all countries? Some believe that music is the universal language because it is a part of the human condition and can be understood through many linguistic and ethnological boundaries.

Spanish teacher Mr. Murphy is a member of the Sun King Warriors, a dynamic group which has received popularity in the local Pittsburgh area.

Murphy’s Spanish teaching and guitar playing collide in an appreciation of world cultures.

Sun King Warriors was formed in 2013 by Jim Donovan, former drummer of Rusted Root.  The Pittsburgh band tours throughout the tri-state area and is a prominent figure in the Pittsburgh music scene.  With two albums released, the band has gained commercial success, receiving radio-play on 93 radio stations across the United States and Canada and landing a spot on the Billboard Americana charts in 2016.

Murphy has been teaching Spanish since 1992. Currently, he teaches Spanish III and AP Spanish, and oversees the Acoustic Guitar Club at IHS.

The High Arrow sat down with Murphy to ask him some questions about his musical interest.

“I have been playing guitar since I was eleven years old, and I also started speaking Spanish around the same age.”

Are those correlated in any way?

“It was coincidental, they started out as interests and then I learned that was what I wanted to do in life. In both cases, I had limited training at a young age.”

“In the world of being a musician, I don’t read music very well, I learned by ear for the most part.  I’ve learned from teachers who know about music theory, as well as teachers who were well-rounded in blues and jazz.  Throughout high school, I played music here and there. It was in the early 80’s, I played in some garage bands. I grew up in Indiana most of my life, and IUP had an immense vinyl collection, so there were a lot of recordings that got people interested in rock and roll, and I was listening to the same ones.  I would listen to early Bob Dylan albums, and even a lot of world music.”

“As far as how the two correlate with world culture and music, I had only about three albums in my house.  One was a Flamenco album, another was some African drumming, and some Irish music. The third one was only half of the Beatles ‘White Album’, because the other vinyl was lost.  For the longest time, I thought that the first half was the entire album. This probably populated my musical imagination, as well as growing up in the early 70’s, the music really resonated with me.”

How did you further your interest in music?

“Fast forward through high school, I played with some garage bands.  One was called Sit and Spin, it was sort of punk rock. After a while, I started to lose interest in music and began to pursue Spanish education.  I didn’t have time to do both, but I played music throughout my undergraduate degree, one of the bands was called Guilty Party, and we played around IUP.”

When was Sun King Warriors founded, and when did you join?

“It wasn’t until 2009 that I started playing music semi-professionally.  I was invited to informally play music with Jim Donovan, the former drummer of Rusted Root.  Coincidentally enough, Rusted Root played at IUP in 1990, Guilty Party, played at the same time, but never met.  In 2001, we crossed paths, and he invited me to join his jam band. I was the guitarist, and it was very rhythmic.  At the time, we thought it was going to be very informal, playing at Farmers Markets or street fairs. Later on, in 2014, Jim Donovan produced his first album, ‘Jim Donovan and the Sun King Warriors’, which I am on.  It was produced in the same studio in Pittsburgh where some of The Clarks albums were produced. Funnily enough, I am about three or four years younger than most of The Clarks. We crossed paths in the mid to late 80s.”

“He decided to get the band together and be more serious about producing original compositions, along with promoting them.  He’s been great about promotion through the internet and the radio stations. Two years later, the album ‘We See Through It’ came out.”

“The band consists of seven men.  There are three drummers, three guitarists, and a bass player.  I’m more or less of a rhythm guitar player, but I play lead as well.”

“Our band plays very family friendly venues in the Pittsburgh and Tri-state area.  One of our missions is to play shows to benefit people, it is part of our mission statement.”

“Our music can be described as a cross between Mumford and Sons and Led Zeppelin.  It isn’t quite bluegrass, maybe more semi-Celtic.”

“My roles changed a little in the band, in the past eight or nine years.  I play guitar along with mandolin. It is sort of unusual, sometimes there are three drummers on stage, as well as a mandolin.  It isn’t bluegrass mandolin, it’s more of a melody instrument, which adds a ‘glittering’ effect on the songs. I also play harmonica.  Last summer, I studied about playing harmonica, and practiced frequently. I’m on the new album with at least one song on harmonica, and three or four with the mandolin.”

What other activities are you involved in outside of IHS?

“I write some of my own tunes.  I work with Mr. Nath, too. He helps me out, and I help him out.  I’ve written a few songs in Spanish, which is a little difficult. Most recently, I’ve been exploring writing in the third person by telling a story.  Some of the songs take place in the Midwest, it’s kind of Americana.”

What advice would you give to young, aspiring musicians?

“Whether or not you are classically trained or not, have an intention for growth when you practice.  It is a life skill, be patient with yourself. You will have to sacrifice some things, maybe some small sacrifices, your social life may suffer for a little.  But, it is a way that you can communicate with other people. In recent years, since I’ve been in charge of Acoustic Guitar Club, I’ve seen more girls play stringed instruments, which had a bit of a prejudice in my generation.”

“Don’t give up on your dreams.  It might not be a full-time dream, it could be a part-time dream.  I’ve had other musicians say they envy that I don’t have to go out and play music to make ends meet, which has really helped to keep things in perspective for me.”

“I would also suggest learning to sing and being comfortable with your voice.”

Attached below is a link to the official Jim Donovan & Sun King Warriors website, which includes access to their album, “We See Through It” as well as a touring schedule.  Check it out to support the band!

Photo Caption:  “Murphy concentrates on his guitar playing in the midst of a song during an on-stage performance with Jim Donovan & Sun King Warriors.” 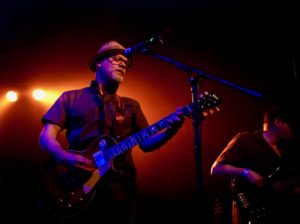