By HANNAH STEELE –  After starting with a brand new lineup during last year’s season, the IHS Girls tennis team has experienced Varsity players eager to play.  Among these players are sophomores and second year team members Mackenzie McGee and Kate Kuzneski, who made an impressive transition from playing #2 doubles previously to #2 and #3 singles, respectively.

“They [Kuzneski and McGee] have made massive improvements since the beginning of last season,” stated head coach Phil Palko, who has been involved with tennis at IHS for 33 years.  “They managed to make it to the section double’s tournament sort of out of the blue, so I expected that they would be playing singles. I think it will be their spot for a long time.”

“I’m very surprised at myself for progressing so much since last season,” expressed McGee.  “I worked all summer for it. Even though it was a long way up with a lot of hard work, I made it my goal.  I am proud of myself.” McGee has a current match record of 3:1.

“I feel like our team has improved a lot since last year, so my expectations are a lot higher than they used to be,” stated Kuzneski, who has a current match record of 1:3.  “I am proud of where we are now. Hard work really pays off. As a young teenager, you can accomplish so much in such a little amount of time if you put your mind to it.”

“We are going to be a good team this year because we have grown as a team through the summer, and my expectations are high for us.  I believe we can make it to playoffs,” expressed McGee.

The team has competed against Burrell, Highlands, Springdale, and Winber, and has a current team record of 1:3. “I was hoping that we were going to be competitive enough for the playoffs…Having three losses early on in the season is hard to come back from,” asserted Palko.

Although off to a shaky start in match play, the girls team spirit is stronger than ever.  “We are all like sisters on the team,” laughed McGee. “We are all so close and I think it makes us so much better.  I love this team.”

“I love creating bonds with this team,” proclaimed Kuzneski.  “I would have never been friends with the people that I am now, and I have the team to thank for that.  Tennis is a lifelong sport, and I can take these skills that I am learning now and use them all my life.”

The team will continue their season with a match against Knoch on September 3. 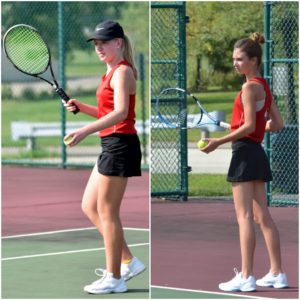 Hannah is a senior co-editor and has been on the High Arrow staff for four years.  In regard to journalism, she enjoys writing the truth and delivering credible news