By HANNAH STEELE- There are many different paths someone could take after they graduate from high school. Some more traditional, such as college or tech school, but for others, a chance to make a difference in both their lives and the lives of others include joining the armed forces.  At least four IHS seniors have voiced their intentions to join the US Marine Corps to further their education and serve their country.

“I am looking forward to becoming a great Marine and waking up every day knowing this country has great men and women keeping them safe,” expressed senior AJ Ryan.  “I am excited about the challenges and getting to do my duty as an American. Freedom surely isn’t free but we sure have the best men and women out there earning it for us.”

“My main motivations for enlisting are realizing the potential of my physical and mental capabilities and wanting to pursue them for our great country of freedom,” Ryan added.  Ryan will leave for Parris Island, South Carolina on July 27 for three months of boot camp.

Students who still want to attend college while making an impact on their country are able to do so through officer training programs.   Senior Justin Raible will be attending an NSI training camp after graduation and a Marine Officer Candidates School in two summers to start his journey into becoming a Marine Officer.

“Serving the greatest nation on Earth is something I have always wanted to do ever since I was young,” expressed Raible.  “I am looking forward to the challenges in my future that I will have to face, and being a part of something great.”

Everyone has different reasons for wanting to join the armed forces.  Senior Andrew Rubinstein, who intends on enlisting in the Marine Corps,  stated, “I am looking forward to becoming something that someone’s proud of and to being the best Marine the Corps has ever seen.”

“I am looking forward to shipping out to Parris Island, South Carolina on June 15,” asserted senior Zeffy Cooksey.  “I can’t wait for the challenge of it all and not letting my family down by quitting.”

No matter what direction one goes after they graduate from high school, there are many different paths, both traditional and non-traditional, that one can take to have a meaningful experience and grow as a person. 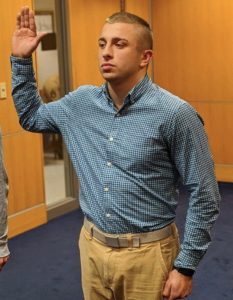