Johnson has many goals set in his first year saying, “I want our school to be a place where students realize that it is okay to agree or disagree with each other. I have found that sometimes the thing that can help solve problems is a new perspective, and I hope that my perspective on school or just the world in general rubs off on IHS.”

With this long term goal in mind, Johnson also revealed his own personal goal.  “I want to get out to more after school events. Whether that be football, soccer, or tennis, or  the upcoming drama and music productions, or just about anything else, I want to get more involved in all the great things that are happening at our school.”

Johnson’s experience in the Army has granted him a unique perspective that has helped him serve as the assistant principal.  “I have learned how to understand differing points of view [from the Army]. I have learned that there are right ways and wrong ways of doing things, and in the end, the right way isn’t always the easy way, but it is the way that you can believe in. I learned that it is okay to learn from your mistakes, but the important thing is to try not to make the same mistake twice. I do know that the perspective that I have been able to gain from my time in the Army has made me who I am today. Also, you have to be able to laugh. Life can be stressful, but if you can laugh at the things that make you the most angry, they typically stop being the thing that makes you the most angry.”

In regard to his message for IHS, Johnson expressed, “I believe that every day presents a new opportunity to learn. This sounds obvious, but I believe that environments are created by the people that are in the given environment. We all have the ability to either make or not make our school a better place. My favorite part about being at IHS is that I have seen way more people making our school environment a better place than the alternative.”

“If I had one piece of advice to give to students, it would be to try to outgrow your fear of public speaking,” concluded Johnson.  “It seems terrifying, but I promise you, it can change your life.” 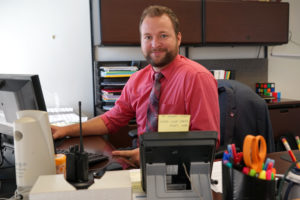 Photo Caption:  “Mr. Johnson is getting used to his new position at IHS, as well as his new office.”