By MADDIE CRIBBS – Throughout March 21-30th, eight students from the Indiana Senior High School travelled with their coordinator, Mr.Brian Henninger, for a ten day trip in Spain. This year’s group consisted of, Amy Arotin, Kira Cunningham, Lily Carone, Alexis Single, Will Ferguson, Ben Brown, Maddux Fisanich, and Jason Zheng. When they arrived the group met up with other exchange students from Michigan, Florida, and Alabama.

“This year the trip was to Spain–next year we are planning to go to Peru,” expressed Henninger.

Over the course of ten days, the group explored multiple cities, staying in hotels and taste-testing foods from different restaurants in different parts of Spain. The students engaged in classes including, cooking, dance, and ceramic tiling, and learning about the Spanish culture.

Given the opportunity, the students eye-witnessed paintings from Velazquez, Goya, and El Greco in the Prado Museum in Madrid. Moving into Granada, Andalusia, they toured the palace, Alhambra, then went onto the exploration of Christopher Columbus’ tomb in Seville. The students also toured the city of Toledo, and lastly travelling into Barcelona to see Gaudi’s Sagrada Familia.

“I loved Barcelona, but I enjoyed the entire trip. Every few days we traveled to a different part of Spain. I learned how different their culture is from ours, like food and clothing” stated senior Amy Arotin.

Each year, the students travelling via the exchange program pay for their own expenses. Senior Kira Cunningham stated, “We went from March 21-30, which was a little short for the price, but so much came with it that in the end it was worth it.”

As the Spanish teacher offering an unforgettable opportunity to young adults, Henninger expressed, “I am most thankful that I get to take students to a new country to live the culture and language and that those students do a great job representing their country, school, and themselves.”

From a small town in Pennsylvania to the biggest cities within Spain, students are given the chance to grow independently, while exploring the culture of another country. “I learned more of who I was and what I was capable of in terms of being independent, and I also learned much about the culture and the daily life. I am most thankful for the opportunity I was given to go to Spain and become closer with friends and more familiar traveling abroad,” stated Cunningham.

To conclude, junior Lily Carone expressed, “My favorite part of the trip was making bonds with people who I originally didn’t know well, and being around people who love speaking and learning about Spanish culture as much as I do. I learned to get out of my comfort zone and try new things. The world is big and we should see and learn about as much of it as we can. I would definitely go back, and in fact, am looking forward to the Peru trip that may happen next year.” 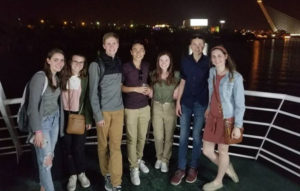