By SHAGUFTA HAQUE – This year has brought forth several challenges for IHS including those involved in the Science Club. The members, as well as the advisors of the club, however, have managed to adapt to the changes.

Despite the uncertainties of enough students joining certain school clubs, the Science Club has earned a handful of new members. Junior Victor Wu remarked, “The number of members in our club is increasing every year, and I think that while this brings challenges – integrating and planning for more new members into the club every year – I think this is a welcomed challenge as it shows that our school and students as a whole are increasingly interested in science.”

Through the virtual meetings being held almost every week, the club advisors – Mrs. Emily Hixson, Mrs. Jamie Edmonds, and Mr. Michael Lehman – are working hard to maintain the normalcy of the club.

The Pennsylvania Junior Academy of Science (regional competition) and the Pittsburgh Regional Science and Engineering Fair (poster presentation) will both be held online this year.

Members are trying to stay motivated to tackle whatever challenges this year throws at them. As advised by junior Yahya Farag, “Stay on time for dates, but also remember that Science Club isn’t just for winning competitions, but also for exploring college and employment possibilities, earning scholarships, and exploring STEM subjects and activities.”

Science Club students and advisors, as well as the other clubs, can only hope to do their level-best and make great things happen out of that effort. 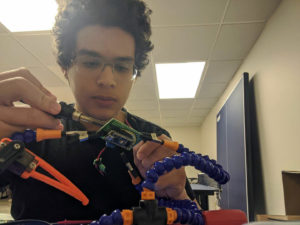