By ADRIANA GUTH-BOROWSKI – The IHS Girls Lacrosse team has grown and matured as a team this year.

The team had to adapt to the newly arranged AAA division. Instead of playing each team in the division twice, each team plays only once.

“The division change has certainly served as a damper for the team, but I think it’s making us a more well-rounded team over all,” expressed junior team captain, Ceci Sherwood. “Also, it has given us challenges to overcome as a team, which is worth the struggle.”

The rearranged division led to IHS playing more challenging opponents. Although players were put to the test, they continued to push through. The team was successful playing against Latrobe, winning 14-4, and Knock, winning 17-11.

“I think it is making us way better players to be in the new division, and whenever we win, the feeling is so much better because the teams are tough,” stated sophomore Chloe Hunter.

“It’s bittersweet, I love these girls with all of my heart, and it is going to be really hard leaving them behind,” stated senior team captain, Ella Spadafora. “On the other hand, I am lucky enough to get to play with them, and every day I have so much fun. Whether it’s messing around at practice, or the intense conditioning, it’s all fun.”

Although there are many graduating, there have been new additions to the team. First year players include Emerson Render, Lilly Nath, Marley Gardner, Emma Cramer, Mia Herman, and Taylor Sheslesy.

This year has provided the team with many challenges, however, they continue to grow and push to improve. “I think we are really rising to the challenge and definitely getting better,” said sophomore Sara Kane. “We are all improving as players and as a team and learning from our tough competitors.”

Photo Caption: “Sophomore Chloe Hunter runs the ball away from a defender.” 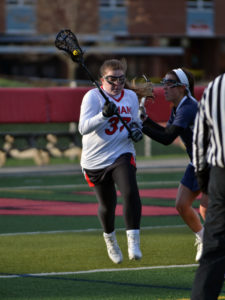 Adriana is an Associate Editor and sophomore who has been on the High Arrow staff for two years. Her goal is to bring accurate news and other stories to the readers of the High Arrow.