By KILEY BRANAN – The basketball season is upon us at last. There are many freshmen coming on to the basketball team at the senior high, all of whom are excited for the season to start.

The season has not yet started but the freshman boys are excited to play.. “I hope there is a team this year because I enjoy playing,” said freshman Michael Lubold. So far there are only eight boys interested in the team this year, this means that these eight boys will be working hard to keep the season going. But they will all be getting lots of playing time.

Despite being a small team, the boys think the season will be fun and exciting. “I like playing basketball because the game is fun and my height gives me an advantage,” said freshman Julian Mann.

The season is coming up quickly and the adrenaline of being back on the court is building. “It’s exciting to play your first season for the high school,  my teammates and I have a great bond and I think the season will go well,” said freshman John Martineau.

At practices, the players have worked hard to make the team by working on drills and in-game skills. The team works well together since they are all in the same grade and since most of them are experienced players. “It is nice to know and get along with my teammates – it is easy to work with them during practice,” said Martineau.

So far, the boys on the team have enjoyed the preseason practices and have started working their way into the season. They all try to work well together and enjoy the game as well as time with their teammates. The boys hope to get more teammates to join them in the sport soon because the season is right around the corner.

Their first game will be coming up quick, good luck to this year’s freshman boys basketball team. 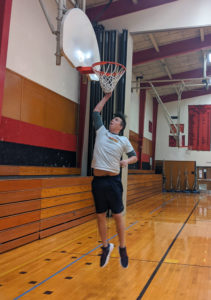