By ADRIANA GUTH-BOROWSKI – A hybrid between soccer, lacrosse, hockey, and basketball, field hockey is a unique sport that blends the characteristics of many activities into one. The White Township Recreation Department has started an introduction to field hockey, which is open to anyone in grades 6-12.

The second session of field hockey is set to begin on February 2 and will continue until March 2. The program is held on Saturdays from 1:00-2:00 pm. and costs $35 per player.  Sticks are available for players to use if they are unable to provide their own.

Classes will focus on the foundational skills and fundamentals that are required for players to be successful. “It’s different from any other sport at the school because everyone is coming in at the same level,” stated junior Amelia Kuzneski. “We have to learn all of the basics together: skills, rules, positioning, and everything else that comes with a new sport. I think that this will allow us to bond more easily as a group because we are all equals.”

The team is coached by Krista Herman who is an IUP alumnus, who played on the field hockey team for four years. Assistant coach, Alphonse Borowski, currently coaches girls lacrosse at IHS. “The goal for the field hockey program is to introduce the sport to girls in Indiana county with the hope of generating enough interest to eventually start a varsity team at the high school,” stated Borowski. “With a beginner team every player is new to the sport, and we have to focus on learning basic fundamental skills such as dribbling, passing, and shooting. Every practice is a blast, the girls are working hard, smiling, and laughing all through practice. They are having a great time learning the game, and I am having a great time coaching them.”

Field hockey can benefit players in other sports by allowing them to stay in shape during off seasons. “Playing with my lacrosse teammates in a different environment is a great way to improve my skills by relating it to field hockey,” expressed junior Ceci Sherwood. “Overall, it is a wonderful experience. Since everyone is starting field [hockey] at a beginner level it doesn’t feel awkward or embarrassing.  I am hoping that the team will be able to compete against other high schools in the upcoming fall season.” 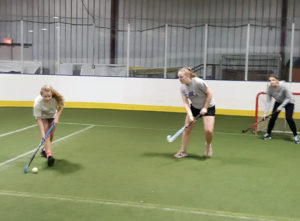