By MAGGIE MEDVETZ- After a slow start filled with push backs and rescheduling, the IHS Dance Team is starting to warm up their kicks and turns for another season.

Black yoga pants and red lipstick in tow, the dance team is ready to finally get back to the swing of things and perform at basketball games.  However, there will be some notable differences from years past, including waiting in the auditorium between performances and dancing for a much smaller crowd.

Another thing that the team will miss, in addition to a dwindling audience, is getting to sit in on games and cheer on the basketball team.

“One thing that I will really miss about dance team is getting to watch the game and cheer on the basketball team,” notes senior Megan Brocious.  “I think that being in the gym and getting to see what’s going on is just more fuel to a good performance.”

Junior Ally Conrad agreed when she relayed that, “I will definitely miss sitting in the stands and watching the game.  We all get so involved and excited just waiting for something to happen, so either way, we get to cheer or even better, dance!”

And although spectators, for the time being, will not be allowed or limited due to restrictions, there is still a way that people can watch both the basketball games as well as dance team performances.  There is a live stream version available for people to stay in tune with what is going on in the world of basketball and dance team.  For more information, check the athletic webpage or visit the following link to join a live stream of different events: https://www.hightopsportsnetwork.com/

“My favorite part of being on dance team is that it’s a different atmosphere from my regular dance classes,” stated sophomore Emmy Davis.  “I get to talk to new and different people and I learn different moves and stuff than if I were just at my regular dance.  I also like seeing people at my school or my friends when I am performing.”

Conrad continued by saying, “My favorite thing about dance team is definitely getting ready beforehand, us warming up together in the lower commons.  Doing hair and makeup in the gym bathroom is a great bonding time for our team and really brings us together as well as hypes us up before games.”

With all of these things in mind, people might be interested in how they can possibly become part of this talented group of dancers.

Practice tryouts for the dance team will take place in January on Tuesday the 19th, Wednesday the 20th, and Thursday the 21st at Sharon’s School of Dance from 3 p.m. to 4:30 p.m.  These three days will be in preparation for actual tryouts which will take place at the Sr. High on Saturday, January 23, time to be announced.

“This year we won’t be able to perform during full time-outs and we aren’t able to sit in the gym, but we are still excited that we have a chance to perform for the quarters and half time,” continued Davis.  “And that we even get a chance to do dance team at all this year.” 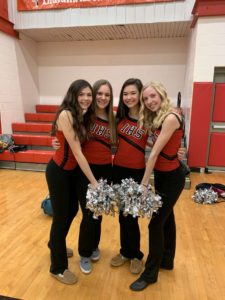 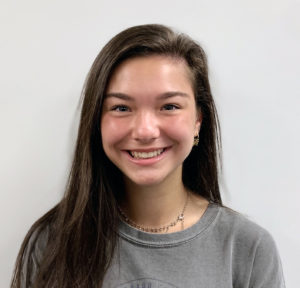