By HANNAH STEELE- Although they are the newest sports team at IHS, the Boy’s Rugby organization is anything but novice.  With a 2-1 record, the team is starting the season off strong, and have no plans of slowing down.

“The main goal is for every player to have fun and learn how to play a new sport,” expressed head coach Todd Raible.  “We expect every player to give their best with their limited knowledge and experience of this game and be as competitive as they can be when playing more experienced and established programs.”

Every team has to have good leadership to be successful, and rugby isn’t an exception.  Team Captain and junior Nathan Meyers has been a member of the team since its beginning.  “We’re like one big family,” voiced Meyers. “Everyone is there with the intention to support each other and have a good time.  Although we are a fairly new team, we have players from all the neighboring schools, such as Homer Center, Marion Center, and United.  Our season is going well so far, we’ve had both wins and losses.”

On March 24, the team scored a big victory against Woodland Hills Senior High School for their home-opening game, concluding with a 29-19 win.  With their confidence increased, the team headed to their next game. Competing against Hollidaysburg Area High School, the boys suffered an unfortunate loss, with an ending score of 12-29 on March 31.

The Rugby team is endorsed by the Pennsylvania Rugby association, and encourages boys from surrounding counties to participate in grades 9-12.

“Being on the rugby team is a great experience and helps me to stay fit,” expressed sophomore and second year player Gavin Prebish.  “I think our team will do much better than last year. We have definitely improved on our tackling and footwork.”

Second year player and junior Caleb White asserted, “My expectation for the season is that we will keep learning and getting better, and let no one stand in our way.”

The Rugby team competes on Sunday evenings, and their schedule can be found on the IHS Athletics website. 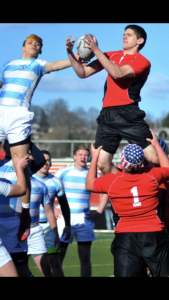