By SHAGUFTA HAQUE – The IHS boys lacrosse team began its season on March 8 and has been having its daily practices ever since.

In order to adhere to the new rules, the team has had to make adjustments. Sophomore Mason Fisher describes, “We now have to wear masks when we’re not playing. We also have to make sure we don’t leave our personal belongings in the locker room and lastly, we are not allowed to shower after practice or games.”

While the seniors are confident about their last high school season, the underclassmen are not any less optimistic.

Junior Yahya Farag expresses, “I feel like this is going to be a good season as long as we can do our best to work together and keep each other safe. I’m looking forward to playing and winning a lot of games this season.”

Although the team hasn’t had their first official game of the season, they have been having their scrimmages for the first few weeks. The scrimmages include all of the teammates getting comfortable with playing together.

Although these are trying times, a lot of newcomers have chosen to be a part of the team. Senior Max Kovalchick advises them, “Work hard, be yourself, and don’t let other people determine who you are. Hard work will carry you farther than anything, and when you combine that with your own goals and motivations, it will carry you far in the sport and in life.”

The players and the coaches have been putting in a lot of effort to make their team better every day. Fisher remarks, “We have a lot of people playing this year which is good, and I expect us to make it to the playoffs this year.”

As supporters, we can only hope that the boy’s lacrosse team wins all their games to make this year as successful as possible.

Kovalchick reflects, “The things I’ll miss more are the fun and memories we all had together.  Whether it was bus rides to games, cheering on our teammates, or playing a great game together, there’s so much I’ll miss about this team and these guys.”

All the very best to the team, especially the seniors, for making the most of this season. 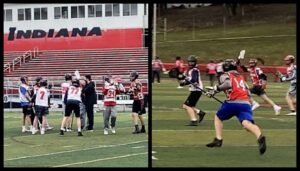 Photo caption: “The boys engage in strategic drills to improve their skills before official matches start.”