By KAYLEE BECKER-GEORGE – Water. Earth. Fire. Air. Not too long ago, the four nations of “Avatar: The Last Airbender” (A:TLA) were a vague memory held by teenagers and young adults as they grew out of their childhood. Then, everything changed when the show was put on Netflix.

A:TLA was first released on Nickelodeon on February 21, 2005. It received much praise and attention even back upon its release. It received several awards, including, but not limited to, five Annie Awards and a Kid’s Choice Award. The show consists of three seasons labeled “books,” each corresponding to a certain element.

The show is about Aang, a twelve year old and the last remaining airbender after the rest of his kind were killed a hundred years ago. Aang is released from an iceberg that he had been encased in by a waterbender, Katara, and her non-bender brother Sokka. They find out that Aang is the Avatar, the only person capable of bending all four elements. Over the course of the show, Aang must master the other three elements, water, earth, and fire, and put an end to the oppressive regime of the Fire Lord.

With the show releasing between 2005 and 2008, then being re-run for a long time afterwards, it directly coincided with the childhood of most of the students of IHS. As such, a lot of students have fond memories of the show. Freshman Addie Lockard said, “I remember watching it as a kid when I was five or six and I thought it looked really cool.”

However, when the show was put on Netflix during May of 2020, a lot of people went back to re-watch it and found a slew of heavy topics hidden in it.

From the genocide of an entire culture of people, to the effects of war on all sides, and even to the concept of taking responsibility regardless of whether or not you want it, A:TLA explores topics that most people wouldn’t expect to see in a children’s show.

Senior Lexi Gibbons enjoys this about the show stating, “It has situations that involve modern issues such as racism, sexism, etc… and I love how the characters handle it at such a young age.”

No matter how old the watcher is, everyone can find a message that they can relate to within A:TLA. “The show has an impact on me because it’s like how the world is today with the different nations and people so divided,” said senior Andre Rubinstein. “We’re the same, and we all bleed the same color, but we divide ourselves. The show shows us that no matter how torn apart we are, we can overcome it and become united. There’s a reason why Team Avatar had at least one person from every nation by the end of the show.”

The show’s sequel, Legend of Korra, was also released on Netflix around the same time. 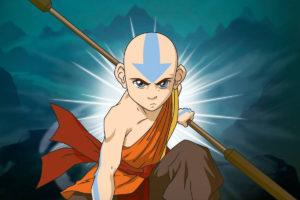 Photo Caption: “The main character Aang, the Avatar and last airbender in the world.”