By HANNAH STEELE-  On October 10, IHS students were invited to the annual Homecoming pep assembly hosted by Student Government Association, where games were played, fall sports were recognized, and the king was crowned.

As the students entered the New Gym and awaited the official start of the assembly, the cheerleaders performed various chants and had an impromptu flip competition as the Marching Band performed standard tunes.

The assembly started with a few words from principal Mr. McElheny regarding Homecoming festivities, followed by band director Mr. Olear thanking the marching band for their great performances.

Mr. Lezanick, the athletic director, then recognized each of the fall sports for their season’s hard work and encouraged students to attend the Homecoming football game against Blackhawk.

Following the speeches, the IHS Dance Team performed an impressive kick-line that excited the crowd.

SGA member senior Connor McQuaide served as the assembly’s host.  McQuaide introduced and officiated several games, including the Half Court Shot Competition, Tug of War, Guess the Song Students vs. Teachers, Hungry Hungry Hippos, Scooter Race, and Pop the Balloon.  Students of all grade levels and various sports teams participated in the events.

“I had a memorable experience in the assembly because I was the only basketball player to successfully land a half court shot,” laughed senior Chase Walker.

Between some of the games, the cheerleaders performed choreography featuring several flips and  tumbles.

As the games and performances came to an end, students and staff alike anxiously awaited the announcement of who would be crowned Homecoming King.

The Queen’s Court, including seniors Brooke Boyer, Harley Kessler, Amelia Kuzneski, Eliza Ray, and Alexis Smathers escorted the King candidates: seniors Simon Bianco, Antonio Caporossi, Daniel Lee, Owen Morris, and Justin Raible, to the middle of the gym.  SGA members introduced the King’s candidates to the crowd and said a few words regarding each. The crowd erupted into applause as Caporossi was crowned the 2019-2020 Homecoming King.

Sophomore and Spanish exchange student Teresa Javato enjoyed her first pep assembly.  “It was all like a movie,” she expressed. “My favorite part was the games that were played because I had the opportunity to participate in one of them with my friends.”

Students left the assembly to the Marching Band performing “Cherokee,” feeling excited for the football game against Blackhawk and the future announcement of the Homecoming Queen. 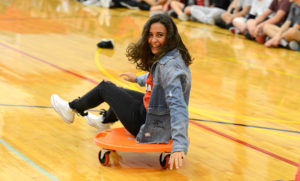 Photo Caption:  “Sophomore Teresa Javato is all smiles as she participates in the ‘Scooter Race’.”